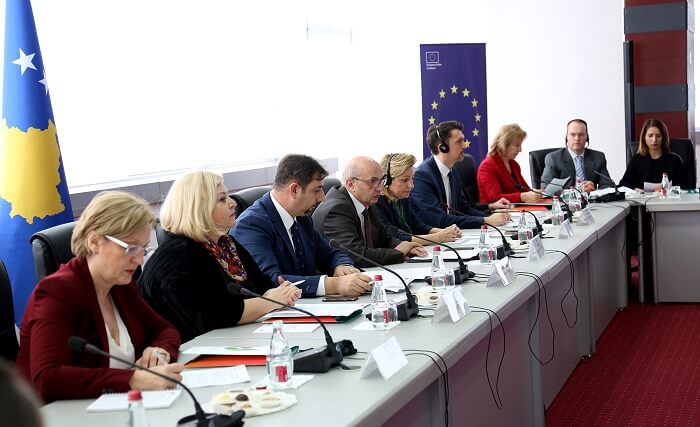 Under the patronage of the Office of the Prime Minister / Office for Good Governance was launched the online platform for public consultation, which aims to assist the institutions in the consultation process and a wider involvement of civil society and all stakeholders in policy decision-making.

The event was attended by representatives of the highest levels of national and international institutions, and civil society organizations, including:

On his introductionary speech, Prime Minister Mustafa thanked the European Union for the contribution  to launch this platform, considering it as vital in establishing a link between the documents produced by Government and public consultations with stakeholders.


He further added that "The purpose of this platform is to help ministries and government agencies of the Republic of Kosovo to the public consultation process, with more involvement of public and non-governmental authorities, civil society organizations and all relevant partners who are responsible for decision making policy. Through this platform, we consider that also to provide a process of communication between public authorities, stakeholders and the public, as well as increasing transparency and accountability of public bodies to the parties and to the public, "said the prime minister.


The Head of the European Union in Kosovo, Nataliya Apostolova said that public consultations are a fundamental value of the European Union, but also the value of good governance, which helps in making better policies and increases the confidence of citizens in the work of public institutions.

"In the context of fulfilment of obligations under the Stabilisation and Association Agreement, meaningful consultation with the public and civil society participation in policy-making, are a fundamental prerequisite for ensuring the effective reforms of public administration, but also have a positive impact on the sustainability of reforms in all other areas, "said Apostolova.

CiviKos Platform Executive Director, Valdete Idrizi, said that online platform is achievement also for the Civikos, which is engaged in the advancement of a more favourable environment between civil society and state institutions.

"We as CiviKos have welcomed the launch of the platform and we expect its functionality, because it is done extremely great job," said Idrizi.

Whereas the executive director of KCSF, Venera Hajrullahu, cited the willingness of the institutions to open policy making process, but pointed out the challenges that still remain to be addressed by the Government.

"It is the need of capacity building for civil servants, planning and policy analysis, communication with the public, in general the capacity for cross-sectoral interaction," said Hajrullahu.

With this agreed also  the Project Team Leader of Technical Assistance of the EU "Support for the Implementation of the Government Strategy for Cooperation with Civil Society", Igor Vidacak, who brought the experience that had Croatia in this area.

"Without a good report written by public institutions why some of the comments made by the contributors are not included in the document, we cannot expect to increase the trust of citizens.
Our experience shows that when ministries published good reports why comments are not included, was increased by over 4 thousand percent the participation in public consultations, "said Vidacak.

Besides the presentation and moderating the meeting, Mr. Habit Hajredini, the Director of the Office for Good Governance made the presentation on how this platform looks like , how users can register and how to contribute in the new policy. According to him, in each ministry were appointed coordinators who are responsible for coordinating the entire process within ministries, to follow the procedures and standards set by the regulation.